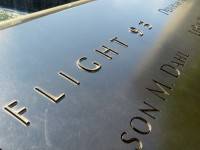 Enjoying Helen today and as it approaches to 1am, I have spent a few minutes of time reflecting on that day in history, 9/11. A day that for our generation will be paramount similar to where were you during Pearl Harbor or when JFK was shot. No doubt you remember where you were when you heard the news, but my story I often try not to think about as it all seems too surreal to fathom.

My good friend is a flight attendant for United Airlines, at the time we had all plans to visit NYC, explore the city, and return home on 9/11. Through my connection with Hilton, I managed to secure a Junior Suite at the Hilton WTC (the narrow black building you see in many photos). The room was situated some 49 floors above the city, this would be my first trip to NYC. The excitement built. Flying on a buddy pass is not always easy, our odds were much better to travel through Newark.

Where I spend some time pondering, we were to spend the night in NJ, and fly home from Newark on Flight 93. This all would have occurred had one thing that summer not change. Dr. Bhatia, my stats professor refused to let me take my final early. The professor was clear that taking any test early could potentially harm others knowing the questions being asked, and the validity of his tests.

Looking back, who could possibly think that his eagerness to not let me depart for NYC as planned, would forever change my path. With the last minute change in plans, the hotels were changed to check into the WTC Hilton on 9/12. I awaited for my vacation to start, and spent the night prior in San Diego.

Where Were You (When the World Stopped Turning) – Alan Jackson,  Written in memory of 9/11

Where was I on 9/11? I awoke at the Hilton Mission Bay in San Diego to the sound of fighter jets flying over the hotel. It seemed so unusually loud and eerie. I turned the TV on, and the hotel information TV noted “Due to Presidential Order, all airports are closed”. I thought, this couldn’t be possible, why would they be closed. I called the Front Desk, in which the Front Desk agent in a very somber voice, said “yes, yes sir, they are closed”. I thought to myself, how strange and will this impact my vacation to NYC tomorrow (9/12).

I walked to the desk in the room and turned on my cell. My phone quickly lit up, voicemail box was full. Several messages were marked urgent, the first I heard was from my father.

“Hey Doug, it’s Dad, you may have not seen it yet, turn your TV on, there has been a terrorist attack on an airplane in NYC, I Love you”

The messages after that from my dad was a blur. Messages were left from colleagues, unbeknownst I changed NYC dates, frantically asking where I was, if I was okay. I changed the channel on the TV, to see footage of the second tower to start falling. The TV came up, and I fell off the side of the bed and sat on the floor, weeping. I had no clue to understand, how could someone do that in the US. Imagining the people in the building, the jumpers, the planes igniting so quickly as they passed through the building. The families on the news, asking if they found their loved one, to please, please call. Pictures of brothers, firemen, employees, EMTs, etc.

Here is a video you may not remember, from Budweiser Superbowl saluting 9/11.

With my travel and love of aviation ever increasing through the years, 9/11 has continued to grow to be more of something I accept but at times, cannot imagine. Imagining those on the planes, altitude dropping so quickly, and the unforgettable flight 93. Looking back on that day that forever changed the world, I pause in a moment of reflection and appreciation of those that lost their lives for our freedom. I pass along the memory of that day, and my love and support to those who have left us as a result of these acts.

Last month, during a work trip to NYC, we toured the 9/11 Tribute under construction. Besides the buildings being beautiful, the tribute site itself was moving. From the names of the flights, towers, pentagon and the previous attempt on WTC, to the lone tree that survived the collapse, and then survived the bad weather in the nursery. The church directly next to the WTC has some memorabilia that is most moving, and will make you heart cry for the families that posted the search papers and pictures.

9/11, it may have passed but it will never be forgotten.