“My God, I’ve arrived. I’m there”, why your life is not a journey

Two years I began this post, each time getting lost in the power of the words and beautiful imagery – “Alan Watts & David Lindberg – Why Your Life Is Not A Journey.”

No words yield justice to the perspective garners from the video. The difference, when I take time to listen and open my heart to hear. Far beyond the cliche, “I hope you dance”, “Life is a Journey”, “Success”, “Heaven After Your Dead”.

“If we thought of life by analogy with a journey, with a pilgrimage, which had a serious purpose at that end, and the thing was to get to that thing at that end. Success, or whatever it is, or maybe heaven after you’re dead. But we missed the point the whole way along. It was a musical thing, and you were supposed to sing or to dance while the music was being played. “

Scenes from Tree of Life

A few you YouTube comments that resonated with my essence.

The beautiful words of Sleeping at Last Song. 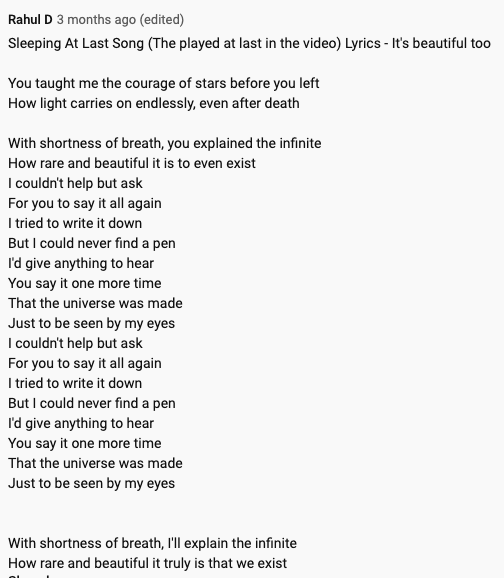 The existence, the physical universe is basically playful there is no necessity for it whatsoever.

it isn’t going anywhere, that is to say, it doesn’t, have some destination that it ought to arrive at. But it’s best understood by analogy with music. Because music, as an art form is essentially playful. We say you play the piano, you don’t work the piano. Why? Music differs from, say travel. When you travel, you are trying to get somewhere.

In music, though, one doesn’t make the end of the composition the point of the composition. If that was so, the best conductors would be those who played fastest, and there would be composers who wrote only finales. People would go to concert to hear just one crashing cord. Cause that’s the end. Say when dancing, you don’t aim at a particular spot in the room, that’s where you should arrive. The whole point of the dancing is the dance.

Now but we don’t see that as something brought by our education into our everyday conduct. We’ve got a system of schooling that which a completely different. It’s all graded and what we do is put the child in the corridor of this grade system with a kind of “come on, kitty, kitty.” And you go to kindergarten, and that’s a great thing because when you finish that you get into first grade, and then come on first grade, leads to second grade and so on and then you get out of grade school you’ve got high school, And it’s revving up, this thing is coming. Then you’re going to college, by joe, by then you get into graduate school. And when you’re through with graduate school you go out to join the world.

Then you get into some racket, where you’re selling insurance. And they’ve got that quota to make, and you’ve got to make that. And all the time the “thing” is coming, it’s coming, it’s coming, that great “thing,” the success you’re working for. then when you wake up one day when you’re about 40 years old, you say my god I’ve arrived , I’m there. And you don’t feel very different from what you always felt. Look at the people who live to retire, who put those savings away, and when they are 65, they don’t have energy left, they are more or less impotent, and uh, they go and rot in an old people senior citizen community.

Because we simply cheated ourselves the whole way down the line. We thought of life by an analogy with a journey, with a pilgrimage, which had a serious purpose at the end the thing was to get to that end, success, or whatever it is, or maybe heaven after you’re dead.

But, we miss the point the whole way along. It was a musical thing and you were supposed to sing or to dance while the music was being played.